“Wasn’t it a great thought Columbus had, to find out America? For if there wasn’t America, the island wouldn’t stand a week” (Flower 6)

In order to develop a greater knowledge of emigration and the emigrant experience, which is a recent topic of class discussions, today I visited the Cobh Heritage Centre with my class. The Cobh Heritage Centre is undoubtedly a unique tour. It is both a stimulating and interactive, cultural experience that not only offers its visitors a virtual tour of Irish emigrant life, but it also leaves them with souvenirs etched in their memories.

The tour takes one back in time and with every advancing step forward from one stage to the next; there is a temporal progression of decades. The temporal trajectory the tour covers includes the mass exodus of emigrants during the Famine, with references to pre and post-Famine emigration numbers.

After this section, the tour takes a temporal leap to the twentieth century and focuses on the technological advancements in transatlantic transport that drastically improved the quality and speed of transportation, to its eventual decline in the 1960s with the reduction of the American line to a mere four stoppages a year.

As one enters the first room of the tour, one can hear the howl of a stormy sea, the sound of cascading waves against the hull of a ship, the piercing cry of sea gulls, the cacophony of clanging bells and falling equipment, and the distant cries of suffering passengers longing for the sight of land becomes an auditory representation of the suffering visually expressed in the famine-ravished faces of the figures on display (See Figures 2 & 3). 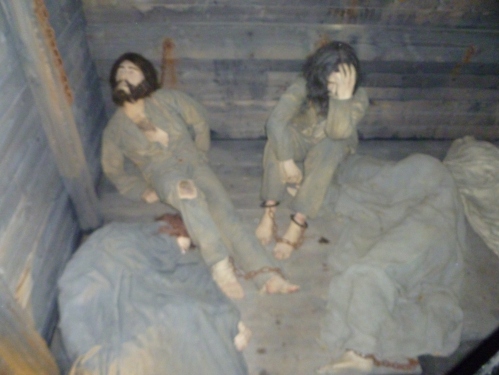 The first piece of information one reads on commencing the tour discusses the details of the custom of the American Wake, which was held on the emigrant’s final night at home. The performance of a wake, a ceremony for the deceased, on a living person is poignant because it symbolises “the finality of emigration” (McCaffrey 78) and its negative correlation with death. America is perceived as a graveyard for the emigrants travelling there and their departure is akin to a funeral with crying and lamenting relatives.

Death from emigration, however, may be either physical or spiritual. Due to the perverse conditions of the ships, the extensive duration of the 4-6 week voyage, the short supply of rations, mutiny, the prevalence of disease and illness, and the perpetual fear of being ship wrecked by ocean storms, many emigrants never reached their destination. Thus, these ships became labelled coffin ships because of the immeasurable death toll with every voyage. The majority of emigrants that did survive the voyages probably never returned home. Their departures are treated as a spiritual, and perhaps even a cultural, death because of their detachment from familial ties, society and their cultural heritage.

American wakes of the Famine era were particularly melancholic because of poverty and the absence of the elements constituting a wake such as tobacco, alcohol and food. Some historical sources, however, suggest that the American wake was not always a sombre occasion. As conditions in Ireland began to improve from the influx of financial assistance sent home by immigrants from abroad, the American wake became a play of conflicting emotions. Parents and relatives’ sadness for the departure of loved ones becomes intermingled with the emigrants’ excitement, hopes and dreams of the prospect of fame and fortune in America. A hyperbolic portrayal of this festive merriment can be seen in Riverdance’s musical-dance rendition entitled The American Wake (See Figure 4).

Riverdance’s inversion of the doom and gloom of the American wake as primarily an occasion of celebration with singing and dancing and not bereavement is an example of the romanticism concealing the harsh reality of emigration, America and American life.

This romanticised configuration of America as the land of freedom, opportunity, and prosperity is what “stimulated emigration” (66), McCaffrey claims. Emigrants’ success in America fuelled more emigration because pre-paid tickets were often sent back home to relatives. As a result, this drastically improved the standard of living back at home, but it also caused emigration to become an oscillating, self-sufficient and evolving machine that powered the development of America.

Irish immigrants’ contribution to the development and construction of America and other countries such as Canada, Australia, and New Zealand is emphasised strongly in the tour (See Figure 5). Blessing states that “[t]he Irish provided the strong backs required to spur much of the most powerful industrial nations.” (11) The inclusion of this positive emanation of emigration counterbalances the negativity of the previous section of the tour. 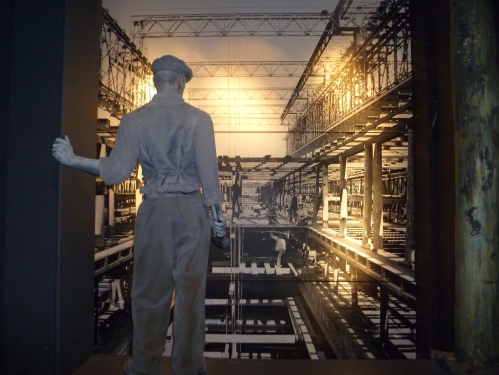 I have said that immigrants’ success in America triggered an increase in emigration from relatives in Ireland. However, the legitimacy of their success is questionable because the extent of success was often tainted by hyperbole and preconceived, romanticised notions of America as a location equated with fruition. Michael Gold’s Jews Without Money is evidence of the false perceptions of America that fed the cycle of emigration.

In Jews Without Money,Mickey’s father, Herman, cancels his arranged marriage to Miriam Glotzer because he wishes to follow in the footsteps of his cousin, Sam Kravitz. Herman says:

“[Sam] sent us a picture. It was marvelled at by everyone. Our Sam no longer wore a fur cap, a long Jewish coat and peasant boots. No. He wore a fine gentleman’s suit, a white collar like a doctor, store shoes and a beautiful round fun hat called a derby.” (Gold 100)

Herman’s envy of Sam’s accomplishments clouds his judgment and he embarks on a journey to America without a sufficient amount of money or first contacting his relative.

Sam poisons Herman’s mind with a romanticized view of America which “looked so nice and happy, this city standing on end like a child’s toys and blocks.” (Gold 104) However, he is not long in America before reality breeches the dam of his dreams. What appears to be “a land of fun” (104) is actually “a land of Hurry-Up” (107). America becomes Herman’s physical and psychological “trap”, but he believes he cannot liberate himself from this trap without the acquisition of 300 dollars.

With that in mind, it would be rather naive of me to imply that all immigrant letters romanticise America. In fact, there is a substantial amount of evidence from letters and memoirs suggest that many emigrants “often regarded their situation as one of unhappy exile” (Miller 5). Miller claims, “this feeling was rooted in acute homesickness” (5). One emigrant from County Limerick states in a letter: “I have everything that would tend to make life comfortable […] but still in spite all I can never make forget home” (qtd. in Miller 5). The legitimacy of the author’s homesickness, along with other immigrant letters of a similar nature, is contentious. I would like to examine in another journal entry the characterisation of the Irish immigrant as an exile. 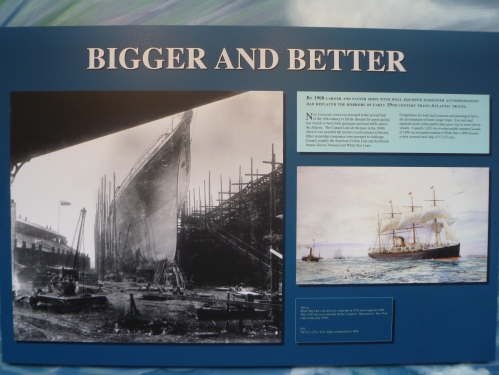 At the start of the tour, there is an abundance of information describing the process of emigration. Then the tour advances to the twentieth century, an era of technological development in America, where the tour pays tribute to the hard work of the Irish immigrants that I mentioned earlier (See Figure 7). The slogan that marks this era of emigration is “Getting there is half the fun” (Cobh Heritage Centre) which is a perverse inversion of the life-threatening voyages of antecedent years.

However, there appears to be a lacuna between these two stages of the tour. I noticed there was a minimum amount of information describing the conditions that awaited immigrants in America. I am uncertain if this is an accidental or wilful omission. However, one could argue it is the latter reason, and thus interpret it as an intentional or inadvertent act of preserving the romanticized perception of America. At the end of the tour, there is a letter by Jerh Murphy that vaguely discusses the processing of immigrants at Ellis Island, but it is not recounted in an entirely negative light (See Figure 8).  Therefore, I suggest the tour’s positive depiction of emigration outweighs the negative image it initiates with.

Consequently, my visit to the Cobh Heritage Centre has affected me in more ways than one. The tour provides a context for the films and texts that deal with immigration and immigrants. It also has made me reflect on our current economic situation in Ireland, which has spurred mass emigration, but obviously not to the extent of the Famine era. The failure of the Irish economy, like the failure of the potato crop, has forced young men and women, the jewels of the Emerald Isle, to seek a future away from home, which is a prospect I may one day have to face.  The tour has undoubtedly provided me with an abundance of information about emigration and the emigrant experience. This knowledge, however, generates more questions which further research in the area will help me answer. 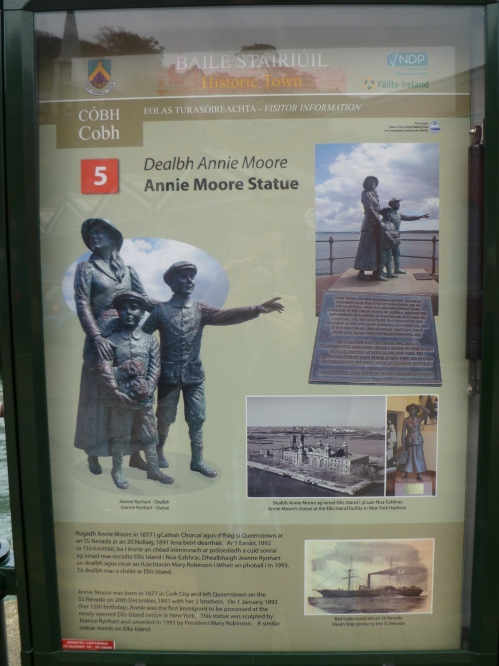 Miller, Kerby A. Emigrants and Exiles: Ireland and the Irish Exodus to North America. New York: Oxford UP, 1985. Print.

From Manuscript to Markup

Reading and writing with Isaac Newton

Various thoughts and papers in french and english

Scepticism, feminism, and queeristry with an Irish bent. Expect occasional knitting, cookery and roller derby. It's all in bits, like.

The first draft of my research, teaching, and reading

It's all about disbelieving your thoughts

In which I talk about...

Digital Scholarship in the Humanities

Writing to Right the World // by Jennifer Browdy

On words and things

Just like the horse whisperer - but with more pages

An interdisciplinary blog reflecting on my research interests

Celebrating the pleasures of a 21st century bookworm

Perspectives on textual transmission - the media and the message

WordPress.com is the best place for your personal blog or business site.